Previous
Next
Which Fish would you prefer to take home and show off?? 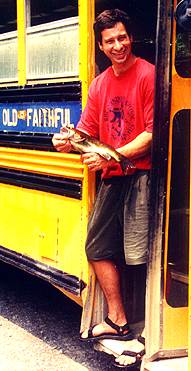 Surprise, It’s the same fish!! To get this ‘best’ photo, make sure you hold the fish straight out to the camera. Really does make a difference!

and a local fish story: Excerpt from “The One that Didn’t Get Away,” by Carlton Bonilla As the sun tucked itself behind the mountains, the chill of the late afternoon descended slowly on the heat of the day, bringing pockets of cool air to low places and a calm to everything in the valley and on the south fork of the Shenandoah River. My father and I had fished all day, catching many fish. But we remained on the river, eager for the elusive trophy of the day, the one that would earn us both bragging rights in our Monday morning worlds. He spoke quietly to me, “try that pool there, cast into the slow part of the water.” He guided the raft towards the pool, both of us searching in the deep, calmer waters. The line that I cast into the deep pool sat idle for a few moments. With a swoosh, the bobber plunged deep into the water. I instinctively jerked the tip of the fishing pole upward. The line tightened and beads of water flew high into the air, catching the late afternoon sun and causing bright splinters of light. Where the line vanished into the water, a point formed and danced on the surface, circled and zigzagged. My fishing rod arched downward, in a near perfect half circle. The bobber remained somewhere deep underwater. My body was electric with adrenaline. “Keep the rod tip up,” my dad said calmly. In contrast, I shouted into the air for everyone in the Shenandoah Valley to hear; “Dad, this one is big!” The fish continued to pull and suddenly, a magnificent small-mouth bass exploded from the river, framed in golden droplets of water that caught the late afternoon sun. As if to see who held his life at the other end of the line, he rolled in the air, suspended above his world for a brief moment, allowing the sun to accentuate his brilliant bronze body. My dad whooped and I shouted, “Did you see that!” The river exploded a second time. Water sprayed in all directions and a whump filled the air, like the sound of one of my heavier friends perfecting a cannonball in the deep end of a pool. The fish returned to his environment. He darted down into the deepest water and line peeled off my reel as I struggled to control his momentum….. This is a fish V built by the Indians. They would place a basket in the V to collect fish or eels. They would also make \’s across the river. Then they would have a ‘holding area’ for the fish until they could harvest and dry the fish and eels. There are several of these along the way.
Previous
Next
Previous
Next